A Drop of Water

A Zen master named Gisan asked a young student to bring him a pail of water to cool his bath.
The student brought the water and, after cooling the bath, threw on to the ground the little that was left over.
"You dunce!" the master scolded him. "Why didn't you give the rest of the water to the plants? What right have you to waste even one drop of water in this temple?"
The young student attained Zen in that instant. He changed his name to Tekisui, which means a drop of water.
Have you attained Zen in your trading ?
What right have you to lose the money that belongs to your wife, children, parents, brothers & sisters ? If you trade recklessly, without a trading plan, you are likely to suffer losses, often large losses. But the money you lose belongs to your family. You are only a trustee. Traders who lose money by poorly planned trading operations are doing injustice to their family.
On Saturday, I was in Bangalore participating as a speaker in an Investor Camp organized by CNBC. This must have been my 21st camp. How time flies ! The new Bangalore Airport was about one and a half hours away from the hotel, Leela Kempski. Sometimes, it took two hours to reach the airport, therefore I was advised to start early. The airport opened about a week ago, but already feels crowded. There were flights from Bangalore to Hyderabad, Chennai & Mangalore. All of these are short distance flights, which can be better served by an efficient, fast train system. But we do not have such train systems. My Kingfisher flight was leaving half full ( or half empty..), with flights from Indigo, Jet and Air India leaving for Delhi almost at the same time. I assume these also has empty seats. Surely, this is a waste as four aircraft fly to the same destination, at the same time all of them half full. We may not be aware but an ecological disaster stares India in the face. Take care, save water, help the environment, as much as you can.
Posted by Sudarshan Sukhani at 11:09 PM 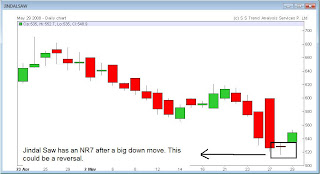 Markets go through cycles of expansion and contraction. This concept is applicable to all time frames. An intra day trader will find periods of small movements within a trading day are followed by bursts of price moving in one direction or the other. A Swing trader can locate days when prices move in a narrow range - these are periods of contraction, followed often by an expansion in price ranges, generally in one direction.

It is useful to track stocks where prices are moving in a narrow range - contraction. Our interest is in what may happen once the contraction is over. A sharp move in prices - expansion - can be expected. NR7 days are one such pattern of narrow range. This is a day when the price range is the narrowest in the last seven days - bulls and bears are equally balanced. One of them is going to get an upper hand, leading to expansion in any one direction. Here is a chart for Jindal Saw where an NR7 was followed by a small up move in price. The up move was enough for a swing trader. It is possible that there may be more upside to come.
Posted by Sudarshan Sukhani at 8:18 PM

There is a popular misconception that day trading does not make money. After all, the day trader starts with many disadvantages. First, she is restricted by time. Second, the trader cannot have the advantage of overnight gaps. Third, the smaller time frames have more noise with less trend. This reduces the chances of making money since it is a trend that makes money.
While all of the disadvantages are correct, they are offset by increased volatility in many markets. Volatility brings in large intra day moves thus providing enough trend to make serious money. When there is large intra day travel range , the trader begins to get the advantage of trending moves inside the course of a single day. Once a trend can be captured, all other disadvantages become irrelevant. The 'overnight gap' actually becomes an advantage, since it also ensures that the trader is protected from adverse gap open.
My conclusion is: In liquid markets with large intra day travel range, day traders have the possibility of making consistent money.
Posted by Sudarshan Sukhani at 7:53 PM

"One of the innumerable problems with Wall Street and the City is that they never do seem to learn from their mistakes. Property market bubbles; whichever hedge fund John Meriwether is associated with this week; the venality of quasi-monopolistic agencies associated with credit, housing or debt ratings.. Each generation seems obligated to re-experience the errors of its predecessors."

All of this is equivalent to saying "This time it is different". How many times have I heard this on TV. We are told that trillions of dollars are waiting to come to India. Thus, this market will consolidate, then go up. Sure. Equity markets remain in a secular uptrend. Prosperity & inflation ensure this. But, traders must survive now, they do not have the luxury of long term bets. If traders make mistakes, they perish (this reads a bit dramatic, they actually go out of the trading business, back to retailing, selling cloth, practicing medicine or whatever financed their trading ventures in the first place). Traders cannot afford to find out that this time it was not different. That would be too late. Trading is then based on what is visible - the movement of prices on a chart are the most visible feature of the market. If prices are falling, it is a sensible idea not to buy. There is no sense in catching falling knives. This simple precaution can save a lot of money for Indian stock market traders.
Posted by Sudarshan Sukhani at 9:06 PM 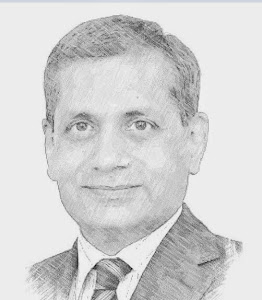